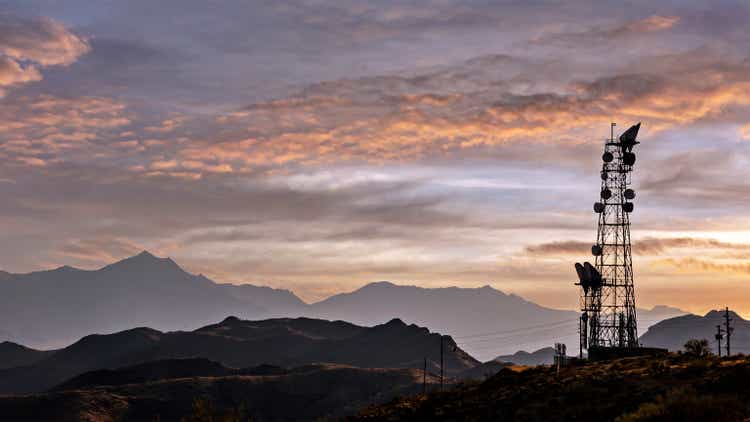 As a value investor, I tend to steer clear of companies that trade at high multiples, especially if those companies aren’t showing significant organic growth. Growth by acquisition can be attractive under the right circumstances, but even that carries certain risks. That said, I don’t mind paying a high sum for a company that is trading at high levels if it is a leader in its industry and generates strong, consistent cash flow that increases over time. A great prospect that fits this description is American tower (NYSE: AMT). As the name suggests, the company owns a large number of communication towers in various parts of the world. He rents them out to organizations that need data transmission to operate. The company is also starting to focus a lot on the data center market, seeing it as another space that has similar characteristics to owning its towers. The company’s recent financial performance has been quite impressive, and although the shares are expensive, they appear to be more or less fairly priced compared to similar companies. All things considered, I would consider the company a moderate ‘buy’ in this environment, reflecting my belief that it should deliver performance above what a broader market is expected to experience for the foreseeable future.

The last time I wrote about American Tower was early July of this year. I praised the company’s historic growth, growth that has come both organically and from acquiring other businesses. Because we live in a data-centric world that is guaranteed to experience continued growth in data consumption, I had a feeling the future for the business would be extremely bright. I was also impressed with the quality of the business and the strong cash flow it generated, leading me to call the business a ‘buy’. Although not much time has passed since the publication of this article, the company has generated a positive return of 2.9%. Unfortunately, that’s lower than the 4.8% rise seen by the S&P 500. But investing takes time, and I think the company’s long-term trajectory remains intact.

When I last wrote about American Tower, we only had data covering the first quarter of its fiscal year 2022. Today, we now have data covering the entire second quarter. The company’s financial performance so far continues to impress in many ways. To see what I mean, we only have to look at revenues. During the quarter, sales reached $2.67 billion. This represents a 16.3% increase from the $2.30 billion generated in the same period last year. This growth occurred across most of the company’s businesses. But there were a few positives to consider. The biggest benefit was in the company’s data center operations. Last quarter sales totaled $191.1 million. This is much more than the 2.5 million dollars generated at the same time last year. The rise was almost entirely driven by the company’s acquisition of data center company CoreSite, which closed in the last quarter of its fiscal year 2021. It also saw revenue rise 104% across Europe , with sales dropping from $87.8 million to $178.8 million. The increase, management said, was largely due to revenue of $60.9 million from newly acquired or constructed sites, primarily related to its acquisition of Telxius Telecom SA. The third part of the fastest growing company was its operations in Latin America. Sales there increased by 16%, from $365.6 million to $425.2 million. According to management, this was mainly due to sites almost acquired or built and net contract escalations of unsubscription.

With the rise in revenues, profitability has largely increased. Given the nature of the business, I don’t really care much about the bottom line of the business. Instead, I like to look at alternative measures for cash flow. FFO, or funds from operations, increased 33.5% from $1.24 billion in the second quarter of 2021 to $1.65 billion this year. On an adjusted basis, the growth was more modest, totaling 6.9%, from $1.08 billion to $1.16 billion. Meanwhile, the company’s EBITDA also increased from $1.48 billion to $1.67 billion. The only metric to experience some weakness was cash flow from operations. This amount went from $952 million to $915.4 million. But if we were to adjust for changes in working capital, it would have gone from $1.01 billion to $1.44 billion.

For the full year 2022, the company should continue to benefit from the organic growth and the aforementioned acquisitions it has made. While not impacting the full year, some deals the company has made should also be helpful in the long run. For example, in July this year, the company partnered with Stonepeak, a leading alternative investment firm specializing in infrastructure and real estate assets. This company will acquire a 29% stake in American Tower’s US data center business as part of a long-term strategic partnership. This particular deal involves a mix of common stock and mandatory convertible preferred stock in a transaction worth $2.5 billion, implying an enterprise value of $10.5 billion. And at the end of August, American Tower reached an agreement with the telecommunications giant Verizon Communications (VZ) to help Verizon continue to roll out its 5G network on American Tower’s U.S. communications towers. Unfortunately, we don’t know what the terms of this particular deal should look like.

Using this data, it becomes quite easy to price the business. In the chart above, you can see the company’s prices both on a forward-looking basis for fiscal 2022 and using 2021 data. As you can see, stocks are getting cheaper across the board . That said, these multiples aren’t exactly cheap. But for comparison purposes, I compared the company to five similar companies. On a price/operating cash flow basis, these companies ranged from a low of 20.2 to a high of 29.2. And when it comes to the EV to EBITDA approach, those multiples are between 17 and 31.4. In both cases, three of the five companies were cheaper than our prospect.

All the data I see suggests that American Tower’s future should remain bright. This does not mean that the company will always outperform the market. The shares are rather expensive on an absolute basis and seem more or less fairly priced compared to similar companies. But overall it’s a major player in the space and it’s a really high quality company that I would consider putting all my money into if I knew I was about to get into a 20 year coma. For investors looking for that kind of stability and a high probability of growth, the company certainly makes sense to consider. And because of that, I’ve decided to keep my “buy” rating for now.