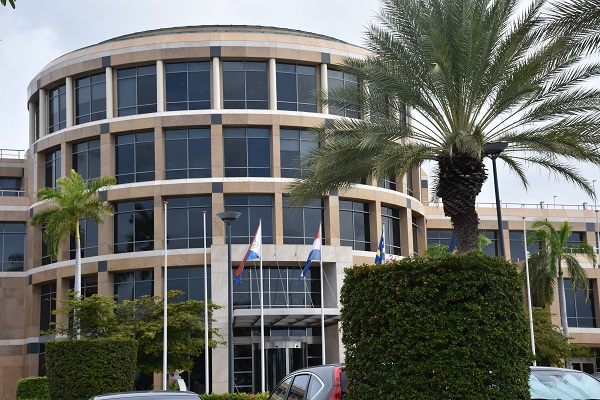 WILLEMSTAD, PHILIPSBURG – The current exchange rate regime of the monetary union of Curaçao and Sint Maarten has been the subject of regular debate over the years. The country reform packages (Landspakketten) for Curaçao and Sint Maarten have brought the subject back to the forefront. The packages included the requirement that a study be carried out by an independent party on the societal costs of a clean currency versus dollarization. This study is included in the staff report of the 2021 IMF Article IV consultation of Curaçao and Sint Maarten. Given the current interest in the topic, the Centrale Bank van Curaçao en Sint Maarten (CBCS) has released a position paper that provides an in-depth analysis of the benefits and costs associated with adopting the United States dollar ( US) as the official currency, i.e. dollarization. Particularly in Sint Maarten, the issue of dollarization as an alternative to the current arrangement is frequently raised as the US dollar circulates widely and is de facto accepted as a means of payment for goods and services.

The CBCS position paper provides a detailed overview of the various exchange rate systems. It explains the differences between a conventional anchor, such as the one currently used by the monetary union of Curaçao and Sint Maarten, a floating exchange rate system, and full dollarization, i.e. when a country adopts the US dollar as legal tender. In addition, the document provides detailed examples of countries that have dollarized and the reasons that led to this decision, as well as descriptions of the pros and cons that they encountered with such an arrangement.

In essence, an exchange rate is the relative price of one currency against another currency or group of currencies. It is an important factor that influences economic activity, inflation and the balance of payments. Therefore, the choice and management of the exchange rate regime is essential to preserve competitiveness, macroeconomic stability and growth. For small open economies, a conventional peg is an often chosen exchange rate arrangement. The choice of the US dollar as the anchor currency in Curaçao and Sint Maarten is explained by the strong commercial relationship with the United States, which matters even more to Sint Maarten than to Curaçao. In addition, most international transactions in both countries are executed in US dollars. Countries with such an exchange rate system manage their foreign trade by having a sufficient stock of foreign exchange reserves, such as US dollars, at the central bank to ensure, among other things, the proper settlement of international payments. . In the case of monetary union, sufficient reserves to cover at least 3 months of imports is the generally accepted guideline.

The Netherlands Antillean Guilder (NAf.) Has been pegged successfully to the US dollar since 1971 at the NAf. 1.79 per dollar. This did not change after the dissolution of the Netherlands Antilles in 2010, and the conventional peg of the guilder to the dollar remained the exchange rate regime in the monetary union between the countries of Curaçao and Sint Maarten. The peg remained strong, as indicated by an import coverage (i.e. the ratio of total imports of goods and services from the Union to official reserves excluding gold) which remained well above of the 3 month standard.

The countries that have chosen to dollarize are either micro-states or countries that have experienced great economic distress. There is an abundant literature on the benefits and costs of dollarization. One of the main benefits of dollarization is the elimination of the risk of exchange rate adjustment, i.e. the currency risk, leading to lower interest rates and more international capital movements. stable, which could stimulate investment and economic growth. Another advantage is the reduction of transaction costs in trading and capital flows as there is no need for currency conversion to the anchor currency. Additionally, dollarization can lead to price stabilization, while inflation tends to converge towards the inflation rate of the anchor currency country. Finally, dollarization encourages budgetary discipline by constraining the monetary financing, that is to say the printing of money, of public deficits.

One of the main costs of dollarization is that the ability to conduct independent monetary and exchange rate policy is completely ceded. To absorb external shocks, the dollarized economy must resort to adjustments in nominal wages and certain prices. Another cost of dollarization is the loss of seigniorage rights, that is, the profit that the monetary authority derives from its right to issue money. 1 Finally, the monetary authority loses its ability to function as a lender of last resort2 for banks in difficulty.

In the case of the monetary union of Curaçao and Sint Maarten, dollarization would probably not bring significant economic benefits while the costs and in particular the risks of transition are real. The benefit of eliminating currency risk is limited given our credible anchoring for 50 years now. Inflation is already relatively low and stable and tends to move in line with US inflation. In addition, dollarization will not change the responsibility of the governments of the two countries to adhere to the strict fiscal rules set out in the Kingdom’s Financial Supervision Act. On the other hand, the loss of the instrument of monetary policy, of government revenues from seigniorage and license fees, and of the function of lender of last resort is evident. Therefore, there is no compelling or urgent economic reason for countries to dollarize. The included table compares the main benefits and costs of dollarization against the current conventional anchor of the monetary union of Curaçao and Sint Maarten.

Ultimately, the decision to dollarize is a political decision, but one that should only be made after careful consideration and understanding of the underlying macroeconomic fundamentals and the necessary institutional, operational and structural reforms. After all, since the establishment of the peg from the guilder to the dollar, neither the Netherlands Antilles nor the current monetary union have experienced any instances of exchange rate adjustments.

For the full article on dollarization, visit the website of the Centrale Bank van Curaçao en Sint Maarten https://www.centralbank.cw/publications/notes-and-advices/advices.

1 This profit is generated due to the difference between the face value and the production costs of banknotes.