For the second week in a row, the price of the EUR/USD currency pair is moving in tight ranges. This proximity technically warns of a strong move ahead, as markets absorbed what had been predicted to raise U.S. interest rates at the fastest pace since 2000. The US employment figures have been announced and today the important US inflation figures will also be announced. The Euro-Dollar’s losses took it to the 1.0470 level, the lowest in five years, and rebound attempts did not break above the 1.0630 level during this period. It is settling around the 1.0526 level at the time of writing the analysis.

The Federal Reserve said Russia’s war in Ukraine and rising inflation are now the biggest threats to the global financial system, replacing the coronavirus pandemic. The notes came in the Federal Reserve’s semi-annual Financial Stability Report, which examines trade and investment trends as well as general economic issues. The report is not an economic forecast, nor does it attempt to predict the following risks to the financial system. It highlights areas of interest for central bankers.

The Fed added that economic uncertainty had increased since the bank’s previous report, with the war in Ukraine being a big part of the deterioration. The bank also pointed to wide swings in asset prices – from Treasuries to stocks – as investors reassess risk in an environment of high inflation. “Inflation was higher and more stable than expected, even before the invasion of Ukraine, and uncertainty about inflation expectations poses risks to financial conditions and economic activity,” the statement added. Fed in its report.

The Fed said persistently high inflation could force central banks to raise interest rates quickly, which could also pose a potential risk of financial instability in the form of lower economic output as well as higher borrowing costs for individuals and businesses. This could cause debt levels, which the Fed says are high but not yet a major concern, to become unsustainable for some companies.

The US central bank also said, “More negative inflation and interest rate surprises, especially if accompanied by a decline in economic activity, could negatively affect the financial system.” For individuals, inflation could lead to job losses as the Federal Reserve raises interest rates, which could also affect the housing market through higher mortgage rates, the bank said.

The report reflects Fed thinking, its findings could be part of the context when the central bank conducts annual stress tests of the nation’s largest banks in the coming weeks. The Federal Reserve used previous reports to highlight the pandemic as well as last year’s interest in “meme” stocks such as GameStop and AMC Entertainment.

In a statement, Fed Governor Lyle Brainard also cited recent volatility in commodity markets as a place of potential risk. While volatility in the energy market has been in the headlines for several weeks now, other commodity markets – particularly those for industrial metals such as nickel, zinc and lithium – have seen significant swings. .

According to the technical analysis of the pair: Before the announcement of US inflation figures, which affect the course of global financial markets. There is no change in my technical view on the price performance of the EUR/USD currency pair, as the overall trend is still bearish. A break of the 1.0500 support will increase the bears’ control over the trend, thus moving towards stronger support levels and the closest after that are 1.0435 and 1.0300, respectively. As I mentioned earlier, lingering weaknesses – the divergence in economic performance, the future of central bank policy tightening and the Russian-Ukrainian war – support the current trend. On the upside, without crossing the resistance levels 1.0795 and 1.1000, the general trend of EUR/USD will remain bearish. 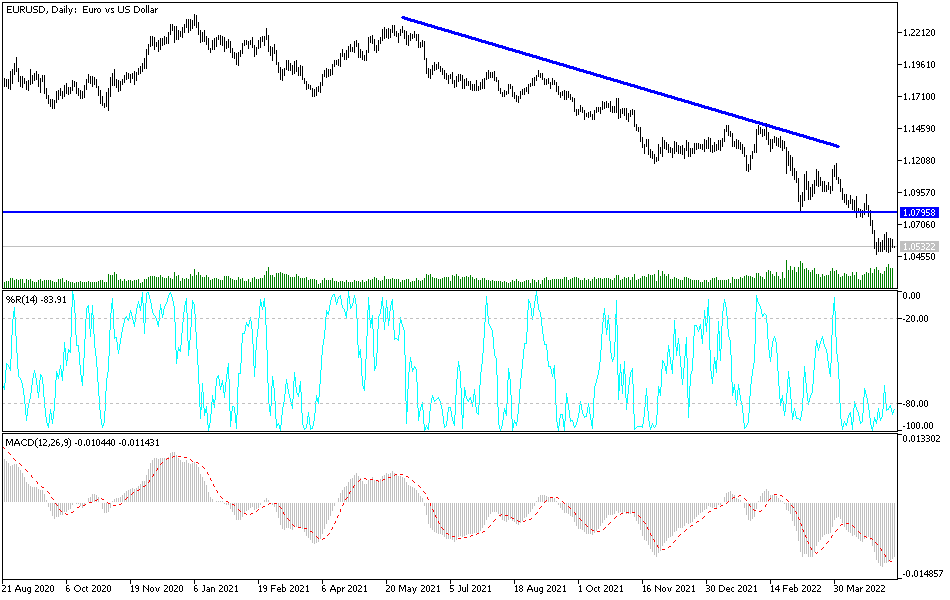