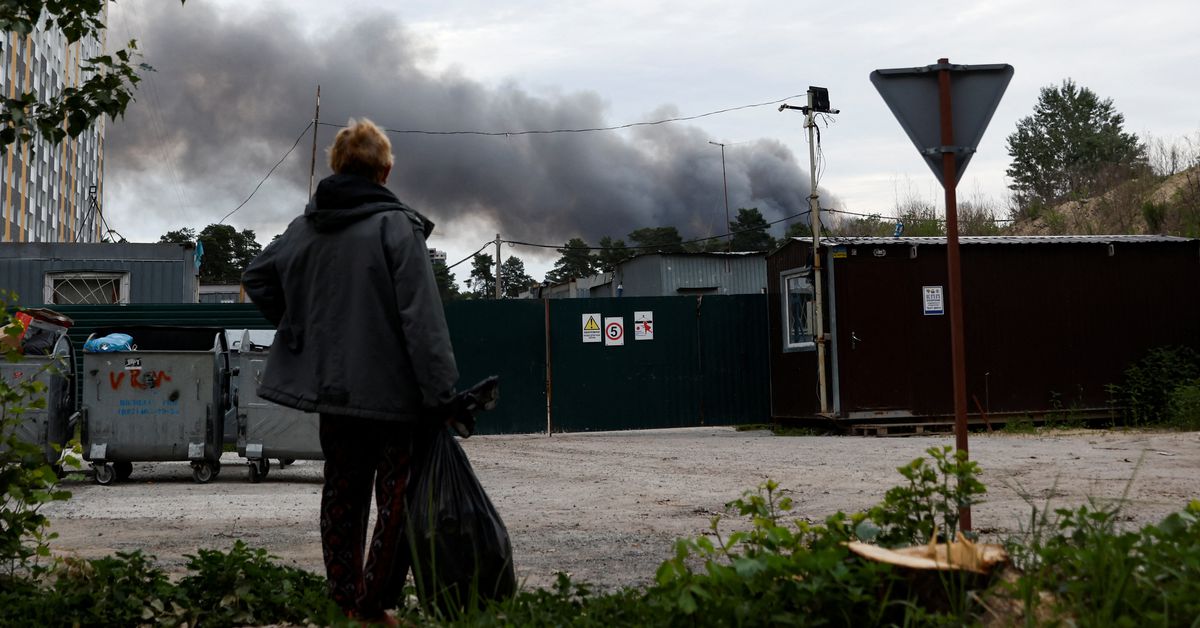 KYIV, June 5 (Reuters) – Kyiv was rocked by several blasts early on Sunday, the Ukrainian capital’s mayor said, a day after officials said his troops recaptured part of the city of Sievierodonetsk, on the eastern battlefield, during a counter-offensive against Russia.

“Several explosions in Darnytskyi and Dniprovskyi districts of the capital,” Kyiv Mayor Vitali Klitschko wrote on the Telegram messaging app. “The services are already working on site.”

A Reuters witness saw smoke in the city after the explosions.

At least one person was hospitalized but no deaths had been reported as of Sunday morning, Klitschko said. Other officials said the Russian bombardment appeared to be aimed at the rail network.

Despite continued Russian attacks on Ukraine and widespread destruction, Kyiv has been relatively calm in recent weeks after Moscow turned its military attention east and south, in particular an intense battle for Sievierodonetsk.

Russia has concentrated its forces on the factory city for one of the biggest land battles of the war, with Moscow appearing to bet its campaign on capturing one of the two eastern provinces it claims on behalf of the separatist proxies.

Serhiy Gaidai, the governor of the Luhansk region which includes Sievierodonetsk, said on Sunday that Ukrainian forces controlled about half of the city after taking over much of the Russian troops.

“It had been a difficult situation, the Russians controlled 70% of the city, but in the last two days they were pushed back,” Gaidai told Ukrainian television. “The city is now, more or less, split in two.”

The claims could not be independently verified.

Britain’s Ministry of Defense said on Sunday that Ukrainian counterattacks over the past 24 hours were likely to blunt any operational momentum Russian forces had previously gained.

Moscow said its own forces were advancing in the city. The Ukrainian military said Russian forces continued to mount assault operations using artillery and controlled the eastern part of Sievierodonetsk.

“The situation is tense, complicated,” Mayor Oleksandr Stryuk told state television on Saturday, saying there was a shortage of food, fuel and medicine. “Our army is doing everything it can to drive the enemy out of the city.”

Both sides claim to have inflicted huge casualties in the fighting, a battle that military experts say could determine which side has the momentum for a protracted war of attrition in the months to come.

A man looks at smoke after explosions were heard as Russia’s attacks on Ukraine continue, in Kyiv, Ukraine June 5, 2022. REUTERS/Edgar Su

Ukrainian officials said at least eight people were killed and 11 injured in Russian shelling in the nearby Donetsk region. Donetsk and Luhansk make up the wider Donbass region where Russia hopes to gain control.

“NO POINTS” IN THE NEGOTIATIONS

In the diplomatic sphere, Kyiv criticized French President Emmanuel Macron for saying it was important not to “humiliate” Moscow.

“We must not humiliate Russia so that the day the fighting stops, we can build an exit ramp by diplomatic means”, declared Macron in an interview published on Saturday, saying he was “convinced that this is the role of France to be a mediating power”. “

Ukraine’s Foreign Minister Dmytro Kuleba tweeted in response: “Calls to avoid humiliation of Russia can only humiliate France and all other countries that would call for it.

“Because it is Russia that is humbling itself. We all better focus on how to put Russia in its place. It will bring peace and save lives.” Read more

Ukrainian President Volodymyr Zelenskiy issued a stark message: “The terrible consequences of this war can be stopped at any time…if someone in Moscow just gives the order,” he said, apparently referring to the Russian President Vladimir Putin. “The fact that there is still no such order is obviously a humiliation for the whole world.”

Putin will discuss the war in an interview to be aired on national television on Sunday. In a brief excerpt aired on Saturday, he said Russian anti-aircraft forces had shot down dozens of Ukrainian weapons and were “cracking them like nuts.” Read more

Ukraine says it wants to push Russian forces back on the battlefield as far as possible, counting on the advanced missile systems promised in recent days by the United States and Britain to swing the war in its favor.

Asked about Macron’s mediation offer on national television, Zelenskiy’s adviser, Mykhailo Podolyak, said there was “no point in holding negotiations” until Ukraine received all the weapons promised, strengthened its position and pushed back the Russian forces “as far as possible to the borders of Ukraine”. .

Moscow has said Western weapons will “add fuel to the flames” but will not change the course of what it calls a “special military operation” to disarm Ukraine and rid it of nationalists.

In the war, which marked its 100th day on Friday, tens of thousands of people are believed to have died, millions have been uprooted from their homes and the global economy has been disrupted.

Ukraine is one of the world’s main sources of grain and cooking oil, but these supplies have been largely cut off by Russia’s closure of its Black Sea ports, with more than 20 million tonnes of grain stuck in silos.

The wild swings of the end of the market turmoil are not necessarily as follows: report