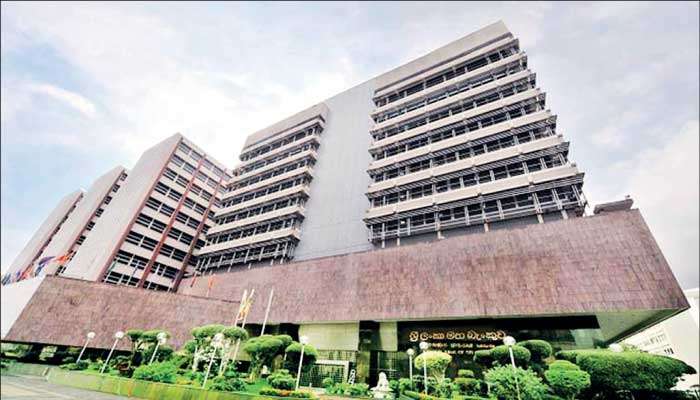 The Central Bank of Sri Lanka

In its latest attempt to prevent further depreciation of the rupee, the Central Bank of Sri Lanka (CBSL) has reintroduced the floating administered exchange rate with effect from 13 May 2022, after a lapse of two

As a result, the CBSL has started announcing an average rate for the US Dollar/Rupee SL exchange rate for interbank transactions along with permitted variation margins on a daily basis. The CBSL determines the intermediate rate based on the previous day’s weighted average spot exchange rate in the interbank market. Authorized banks were asked to indicate the rates for buying and selling currencies within the specified margin for their transactions with customers.

Instant appreciation of the rupee

The average rate for May 13 started from Rs. 360.00 with an allowed variation of (more or less) Rs. 2.60. Following this guidance, the rupee appreciated by 3.3% to Rs. 365 per US dollar on May 13 from Rs. 377 the previous day. The rupee’s appreciation occurred for the first time since the exchange rate was pegged late last year and since the currency floated freely in early March this year.

As envisaged by the CBSL, the managed float would strengthen the exchange rate and thereby ease liquidity pressures in the domestic foreign exchange market. However, it is doubtful that the CBSL will be able to maintain it for long due to the lack of foreign exchange reserves to defend the rupee and emerging inflationary pressures.

What is managed float?

A managed exchange rate float, also known as a “dirty float”, is an intermediate regime in which the exchange rate is neither fully fixed nor free floating. Instead, the value of the local currency is held within a range against a foreign currency (or basket of currencies) by central bank intervention.

Although the managed float helps to facilitate private sector activities by reducing volatility in the foreign exchange market, it could create adverse effects, especially on the export sector, if the central bank tries to keep spreads below the levels market equilibrium, resulting in an overvalued exchange rate. 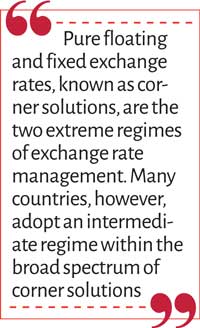 maintain the exchange rate within the announced range. An essential prerequisite for an effectively managed float in this way is therefore that the country’s central bank has sufficient foreign exchange reserves to inject dollars into the market when the national currency depreciates beyond specified margins.

As a central element of the economic liberalization package launched in November 1977, a managed floating exchange rate system was adopted in Sri Lanka to replace the fixed exchange rate system that had been in effect until then. Accordingly, the CBSL announced the buying and selling rates for the US dollar for its transactions with commercial banks, and the banks were required to offer buying and selling rates for the currencies within the range specified for their clients. The spread between CBSL’s buy and sell rates has gradually risen over the years.

The CBSL abandoned the managed float regime in January 2001, as it failed to resolve the severe balance-of-payments crisis and large flight of foreign exchange reserves experienced at the end of 2000. Instead, the CBSL moved to an independent floating regime which helped to dampen the outflow of foreign exchange reserves and reduce market expectations of further depreciation of the rupee and thereby stabilize the exchange rate.

The exchange rate is currently under enormous pressure due to the continued deterioration of the balance of payments and the flight of foreign exchange reserves. In the first quarter of this year, the trade deficit rose to $2,402 million from $2,059 million in the same period of 2021 due to an increase in imports. Workers’ remittances fell by 58% in the first quarter of this year. Tourism receipts also remained weak.

The overall external deficit doubled in the first quarter of this year to reach 2,269 million dollars against 1,101 dollars for the corresponding period of last year. This gap had to be filled either by depleting foreign exchange reserves or by borrowing abroad. As the country does not have sufficient reserves, recourse to foreign loans is the next option. The space available for foreign borrowing is also extremely limited due to the country’s default situation and low global credit ratings.

The shortage of dollars resulting from the deterioration of the balance of payments, as explained above, exerts constant pressure on the exchange rate, forcing a further depreciation of the rupee. Therefore, it would be extremely difficult to reduce volatility in the FX market through the newly introduced managed float, as planned by the CBSL.

Impact of the exchange rate on inflation

The impact of exchange rate changes on domestic prices, known as pass-through 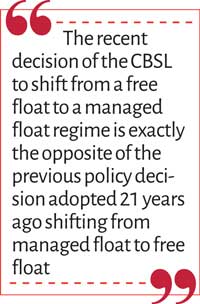 indeed, is a key transmission shock in an open economy. It can be defined as the percentage change in prices in response to a 1% change in the exchange rate. Understanding the magnitude and duration of the exchange rate pass-through to import prices and final consumer prices is critical for prudent exchange rate management.

Cost inflation caused by exchange rate depreciation could be aggravated by wage increases.

On the demand side, the country is already experiencing inflationary pressures emanating from the excessive printing of money by the CBSL to finance the growing fiscal deficit. The government is soon to increase the limit on treasury bills from Rs. 3 trillion to Rs. 4 trillion to meet wage bills and other essential payments in the coming months. This will lead to further increases in Treasury bond yields which have already reached 25% per year for all maturities.

As the market would be unable to absorb all of the treasury bill issues at acceptable yields each week, the CBSL would have to purchase the unsold inventory, which would lead to continued money printing and inflationary pressures.

Unstoppable depreciation of the rupee

Given the serious difficulties in the balance of payments, the depletion of foreign exchange reserves and galloping inflation, it will be extremely difficult for the CBSL to maintain for a long time the foreign exchange margins announced recently within the framework of the managed floating and prevent further depreciation of the rupee.

As long as the official exchange rate band is held below the market equilibrium level, black market forex trading will continue to thrive despite CBSL’s stern warnings.

(The author is Emeritus Professor of Economics at the Open University of Sri Lanka and a former central banker, contactable at [email protected])