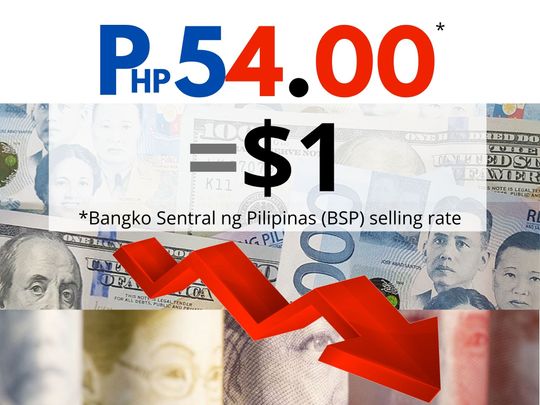 Central bank data showed the peso slipping to Php53.50 (buy rate) against the US dollar; it was selling dollars for Php54.00 on Monday. The UAE dirham stood at Php14.52 on Monday.

The latest gold|forex rates are here.

The Asian currency fell to its lowest level in more than three and a half years.

The peso led the losses on Monday with its 0.5% drop that dragged the currency to its lowest since October 2018.

Bangko Sentral ng Pilipinas (BSP), the country’s central monetary authority, is expected to decide on possible rate hikes this year to curb rising inflation, following a recent decision by the US Federal Reserve, which led to a chorus of rate hike decisions from most central banks.

It also left room for further policy rate hikes due to high inflation and a higher-than-expected balance of payments (BOP) deficit.

The central monetary authority of the Philippines is expected to make a policy decision on rates on Wednesday. The meeting is currently the focus of market analysts who are keeping a close eye on the country’s current account balance, which is expected to see larger deficits in 2022 and 2023 than initially forecast.

Depending on the rate hike, the peso could see further weakness due to the greater impact of higher oil prices, which the Philippines depends on imports, analysts said.

Meanwhile, the growing trade deficit will continue to put downward pressure on the currency.

Recession fears: what a higher balance of payments deficit means

The peso has fallen nearly 11% over the past 12 months against the US dollar.

Amid the falling peso and external risks, the Philippines’ central bank said on Friday it expects the country’s current account balance (balance of payments, BOP) to post deficits in 2022 and 2023. than previously expected.

A balance of payments deficit means that the country imports more goods, services and capital than it exports.

By implication, it must borrow from other countries to pay (in US dollars) for its imports, thus increasing the demand for US currency.

Friday, the Philippine Dealing system, the central clearing house of the country, recorded 962.5 million dollars of foreign exchange transactions, against 1.141 billion dollars the previous one.

Only flexible exchange rate will pull Kenya out of currency shock, IMF says