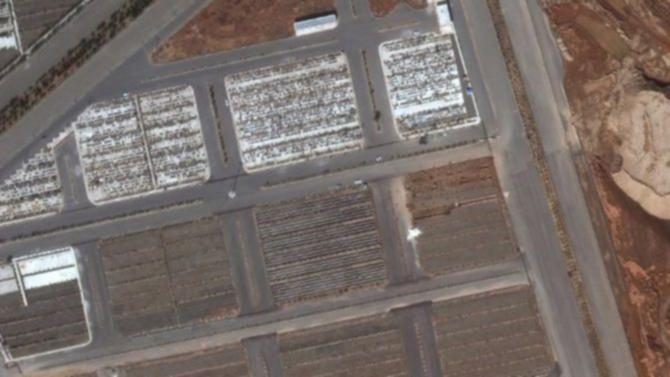 The country has reported at least 10,075 confirmed coronavirus cases and 429 deaths, the third highest number of cases after mainland China and Italy.

Satellite images from March 1 and 8, released by Maxar Technologies, appear to show increased activity inside the Behesht-e Masoumeh cemetery in Qom. The footage shows what looks like two new grave trenches on March 1, with more excavation following.

According to Islamic tradition, bodies are supposed to be buried soon after death. But Behesht-e Masoumeh morgue manager Ali Ramezani told Iranian state television earlier this month that burials were being delayed because testing for the virus takes time. And while corpses are traditionally washed with soap and water before burial in Iran, two medical workers in Qom told CNN that in some cases epidemic-related precautions prevent staff from observing them. traditional Islamic guidelines for burial.

A morgue video showed dozens of bodies sheathed in black bags on the floor of an Iranian morgue, as workers in protective gear and masks actively walked among them.

Iran was already in the grip of a crisis. Now he has the worst coronavirus outbreak in the Middle East

The Persian New Year, or Nowruz, falls on Friday, March 20. Many Iranian families visit cemeteries before the end of the Persian year as part of the annual tradition. Iran’s Supreme Leader Ayatollah Ali Khamenei has canceled his annual speech for Nowruz, the state-run IRNA news agency reported on Monday. Khamenei will not be visiting the city of Mashhad, the site of Imam Reza’s shrine, where the speech is usually delivered.

“Due to the spread of the coronavirus and the strict recommendations given by health officials and specialists to avoid any form of gathering and to refrain from traveling and leaving cities to prevent the spread of the disease, the ceremony of speech of the chief… will not take place this year ”, indicates the press release quoted by IRNA.

Iran took drastic measures last week to stop the spread of the virus. The government has banned Friday prayers in centers in all provinces of the country. Schools and universities have been closed. Concerts and sporting events have been canceled.

Iran’s 31 provinces have all been affected by the virus, and a number of senior officials have fallen ill.

Former Iranian foreign minister and current Khamenei adviser Ali Akbar Velayati has tested positive for the virus and has been quarantined at his home in Tehran, Iranian semi-official ISNA news agency reported on Tuesday.

Another Khamenei adviser, Mohammad Mirmohammadi, 71, died last week, and one of the country’s top clerics, Hadi Khosroshahi, died of the disease last month.

Previously, Iranian officials had confirmed that 23 members of the country’s 290 members of parliament had tested positive. We know that two members are deceased. Several vice presidents, many of whom are Iranian, have also tested positive.

Meanwhile, Iran on Friday rejected an apparent offer by US President Donald Trump to help Iran fight the virus. Trump said, “We have the best doctors in the world. We are offering assistance to Iran.

Foreign Ministry spokesman Abbas Mousavi called the offer “hypocritical” and “repulsive,” and accused the United States of “economic and medical terrorism,” according to Press TV.

“Instead of hypocritical displays of compassion and disgusting bragging, you should end your economic and medical terrorism so that drugs and medical supplies can reach medical personnel and the Iranian people,” Mousavi said.

“We don’t need American doctors,” Mousavi said, adding that Iran has “the best, bravest and most important medical personnel in the world.”

Coronavirus update: Myer extends all store closures until at least May 11

Are rising markets making ready to lift rates of interest?

S’wak water provide to be corporatized underneath proposed modification…