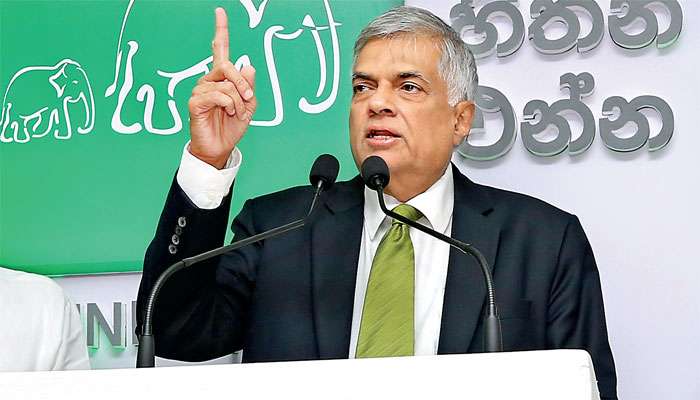 This is in fact a reality, because during the period 1977-1994, the World Bank, the Asian Development Bank and other globally recognized monetary institutions were actively engaged in the country’s economic development activities.

However, it should be clarified that the government must maintain economic activities within a certain framework and must not seek to falsify the data concerning the monetary agreements concluded. Thus, it is evident that the economic and developmental activities of Sri Lanka were carried out within a regulated framework with appropriate economic and monetary parameters during the era of the UNP government. It is therefore imperative to reiterate the facts stated by Ranil Wickremesinghe, in order to raise public awareness of the true situation of resorting to the IMF to request financial assistance, during the current economic crisis.

The IMF is an international organization that promotes global economic growth and financial stability, encourages international trade, and reduces poverty. It was founded in 1944 under the Bretton Woods agreement with the World Bank, with 44 member states. He encouraged international financial cooperation by introducing a system of convertible currencies with fixed exchange rates. The Fund currently comprises 189 Member States. The IMF began promoting floating exchange rates after the collapse of the Bretton Woods system in the 1970s and this system continues to this day.

Among the main functions of the IMF are monitoring, capacity building and lending.

In addition, the Fund also provides relief to poor countries hit by the worst catastrophic natural disasters as well as those battling public health crises, under the Catastrophe Containment and Relief Trust under which Guinea, Liberia and Sierra Leone received $100 million each in February-March. 2015 to fight Ebola.

Sri Lanka and the IMF

Sri Lanka became a member of the IMF on August 29, 1950 and has a quota of 578.8 million (SDR) and the amount of purchases and loans outstanding in September 2021 is 922.26 million (SDR) . Sri Lanka has entered into 16 financing agreements since joining.

Awareness of the same:

This political program is then presented to the Board of Directors of the Fund by a letter of intent and detailed in a memorandum of understanding.

Conditions imposed by the IMF in Sri Lanka lately

There happens to be an attempt to propagate misconceptions regarding the conditions imposed by the IMF in Sri Lanka, and hence it is important to gain a clear understanding of the same.

The 2016 government under Prime Minister Ranil Wickremesinghe secured an expanded financing facility of $1.5 billion for a period of 36 months, starting in June 2016. In granting the said facility, the IMF imposed four motives to which the government had to conform. These are:

2. Reduce the decline in foreign exchange reserves held by the Central Bank.

It is clear that the four recommendations above must be implemented in the public interest. I would like to emphatically state that it is a common characteristic of schemer politicians to create ghosts in the minds of the public, in order to achieve their petty means.

Sri Lanka accepted the following six principles in order to obtain the said loan in 2016:

3. Introduce reforms for the management of Public Finances.

4. Introduce reforms for the management of public enterprises (SOE).

6. Introduce reforms in the country’s trade and investment sectors.

However, the overthrow of our government in 2019 caused Sri Lanka to lose the second quarter of said loan repayment, which meant a massive loss of foreign currency for the country. It is therefore imperative that the public be made aware of this reality.

At present, the IMF is providing financial assistance and debt service relief to member states experiencing economic crisis due to the pandemic. Overall, the IMF earns about $250 billion, a quarter of its $1 trillion lending capacity. In total, the IMF provides financial assistance to 87 countries for an amount of 167,729.14 million dollars.

In the Asia-Pacific region, countries such as Afghanistan, Bangladesh, Nepal and Myanmar are currently receiving monetary assistance under the Rapid Credit Facility and the Rapid Financing Instrument.

In addition, the IMF asked China and other developed countries to suspend debt collection from poor countries during this period, which was approved at the G-20 summit. G-7 countries have also pledged an additional $100 billion in special drawing rights, which are an internal currency of the IMF, to finance poor countries in June 2021.

The most important factor to keep in mind is that getting an IMF loan would attract developing countries to invest in Sri Lanka. The reforms introduced by the IMF would help to reduce the country’s budget deficit and therefore, it is unjustified to instill fear in the minds of the public by seeking assistance from the IMF.

It is in the light of the above circumstances that the leader of the United National Party, Ranil Wickremesinghe, reiterated that it is the responsibility of the government in place to request assistance from the IMF, for more than a year to date. It is the surest road that will save the country from falling into ruin.

It is up to the public to decide the fate of those who propagate falsehoods about the IMF; because these factions are prejudiced against creating appropriate financial and economic reforms, which will stabilize the country and exclude the possibility of corruption and unjust enrichment.

It is evident that after looking at the cases where Sri Lanka has requested IMF assistance, the public has been freed from the scarcity and the need to stand in long queues for basic necessities. Political parties that oppose the request for such assistance from world-renowned sources such as the IMF, have wrecked the economy, creating increased financial stress and further burdening the public with excess debt.

Most people question the role of the United National Party in stabilizing the economy. It was the UNP that introduced discipline both in the economy and in tax expenditures. This may have caused additional stress for some parties who sought to achieve their own ends through deceptive means. However, it is only the United National Party that has always endeavored to safeguard the interests of the public. This becomes clear when one studies the period 2001-2004 during which the opportune measures of Prime Minister Ranil Wickremesinghe enabled the public to be deleveraged.

Ranil Wickremesinghe proved that it is indeed possible to steer the economy in the right direction and manage the increased pressure on the economy, when the UNP took over the reins of the country on January 8, 2015. So I ask the public to make use of the knowledge of such a visionary leader in the new year of 2022.